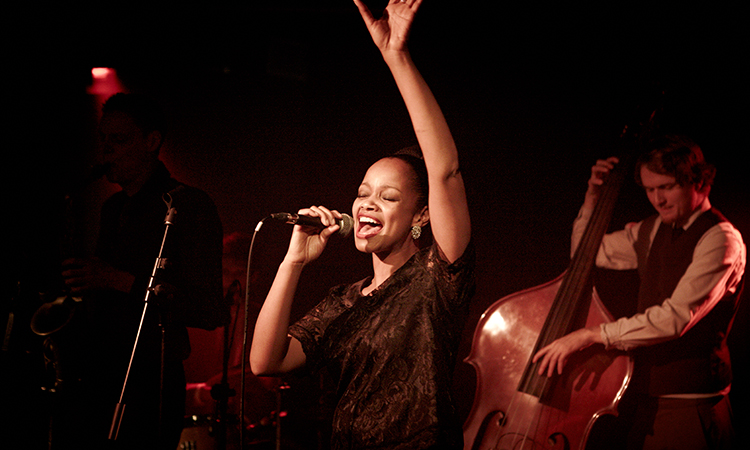 In 1939, seventy-five years ago, a young Billie Holiday took to the stage for the very first time to perform a protest song that would become her signature tune, Strange Fruit. It was at the end of her performance. Lights were dimmed with just a pencil light on her or face. Waiters stopped serving; the bar was silent and there was no encore. Patrons were left to consider the message in the song.

The venue was Cafe Society, the legendary New York nightclub opened in 1938 by Barney Josephson, an idealist who strived towards racial equality and progressive causes. Café Society became the first racially integrated club in New York City, perhaps the United States of America, calling itself ‘The Wrong Place for the Right People’.

Cafe Society Swing is a musical revue that tells the remarkable, true story of the pioneering club from its opening in 1938 to its demise in 1949 during which time it played host to some of the finest musical talent of the 20th century, including Billie Holiday, Lena Horne, Sarah Vaughan, Count Basie, Sister Rosetta Tharpe, Big Joe Turner and many others. It follows the club’s story from its idealistic left-wing beginnings in depression-era America, through all its struggles and triumphs, to its eventual demise in the anti-Communist hysteria of the late 1940s.

Cafe Society Swing returns to the Leicester Square Theatre for its first full West End run following two sold-out shows there last year, and 2012’s residency at the Tricycle Theatre both of which earned rave reviews. It then heads off to New York City.

Revised and revitalized with a new cast that boasts the crème de la crème of the UK jazz scene, Cafe Society Swing takes the audience on a thrilling musical journey performing classic songs of the period. Stellar vocalists Vimala Rowe, Cherise Adams-Burnett and Ciyo Brown, alongside the Cafe Society All Stars which include, amongst others, Jason Yarde, Denys Baptiste, Shane Forbes and Winston Rollins perform an irresistible soundtrack of music from many of the artists who performed there.

Researched and written by musical director Alex Webb with the help and advice of Terry Trilling-Josephson, widow of Barney Josephson (1902–1988).