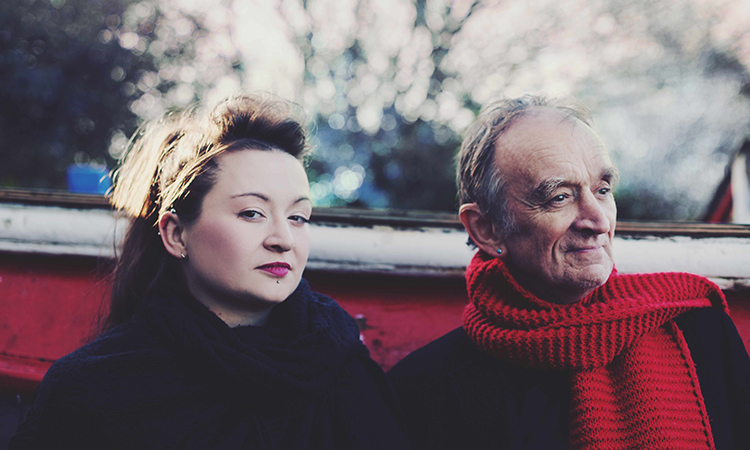 Album: The Moral of the Elephant

It’s nearly 50 years since Martin Carthy recorded his iconic, eponymous debut album and more than 20 years since his daughter Eliza Carthy’s recording debut. Throughout their respective careers both have toured and recorded with many others (Eliza shared the bill with her acclaimed mother, Norma Waterson, on their award-winning ‘Gift’ album in 2010) but finally, this trail-blazing father and daughter have made their first ever duo album, ‘The Moral of the Elephant’ (Topic Records, 2nd June 2014). Martin and Eliza will tour the UK together throughout May and June 2014, including a special show on 6th June at Queen Elizabeth Hall, Southbank Centre in London.
To coincide with Record Store Day (19th April), Topic Records will be issuing a special edition vinyl single of 2 songs which will feature on the final album. ‘Happiness’ was written by Nick Drake’s Mum – Molly. It was one of a number recorded by her in the 1950s and only recently unearthed (and released by Squirrel Thing Recordings). It’s the first time this song has been covered by a major recording artist. Meanwhile, ‘The Queen of Hearts’ is a new version of a song which Martin first recorded on his debut album in 1965.
The full length album, ‘The Moral of the Elephant’ features 11 mostly traditional music tracks, including ‘The Elephant’, on which the title of the album is based. It’s an interpretation of a setting of the 19th poem by John Godfrey Saxe – an allegory of theological dispute – which itself is an adaptation of an ancient Indian parable.
Produced by Oliver Knight (Lal Waterson’s son) with Martin and Eliza, the duo reinterpret and revisit a number of songs on this new album, including “The Trees They Do Grow High” (with Brass Monkey – Head Of Steam, 2009); “Ye Mariners All” (with Waterson:Carthy – Waterson:Carthy, 1994); as well a duo with Martin and Bert Jansch (from Acoustic Routes, 1993). Meanwhile, “Bonny Moorhen” and “The Grand Conversation on Napoleon” are traditional pieces (from the Roud Collection 1189). Fittingly, several of the songs take the form of a conversation between parent and child.
Martin Carthy, who turns 75 in May this year, still regularly tours the UK, but his recordings are becoming increasingly rare. Between them, father and daughter have innumerable accolades. Martin Carthy, MBE, recently received a Lifetime Achievement Award at the BBC Radio 2 Folk Awards 2014. The ceremony was held at the Royal Albert Hall, where Martin received his award from fan, Jarvis Cocker. Martin and Eliza then performed, ‘Died for Love’ (by Mike Waterson). Meanwhile, Eliza Carthy is the only folk musician to have been nominated twice for a prestigious Mercury Music Prize.