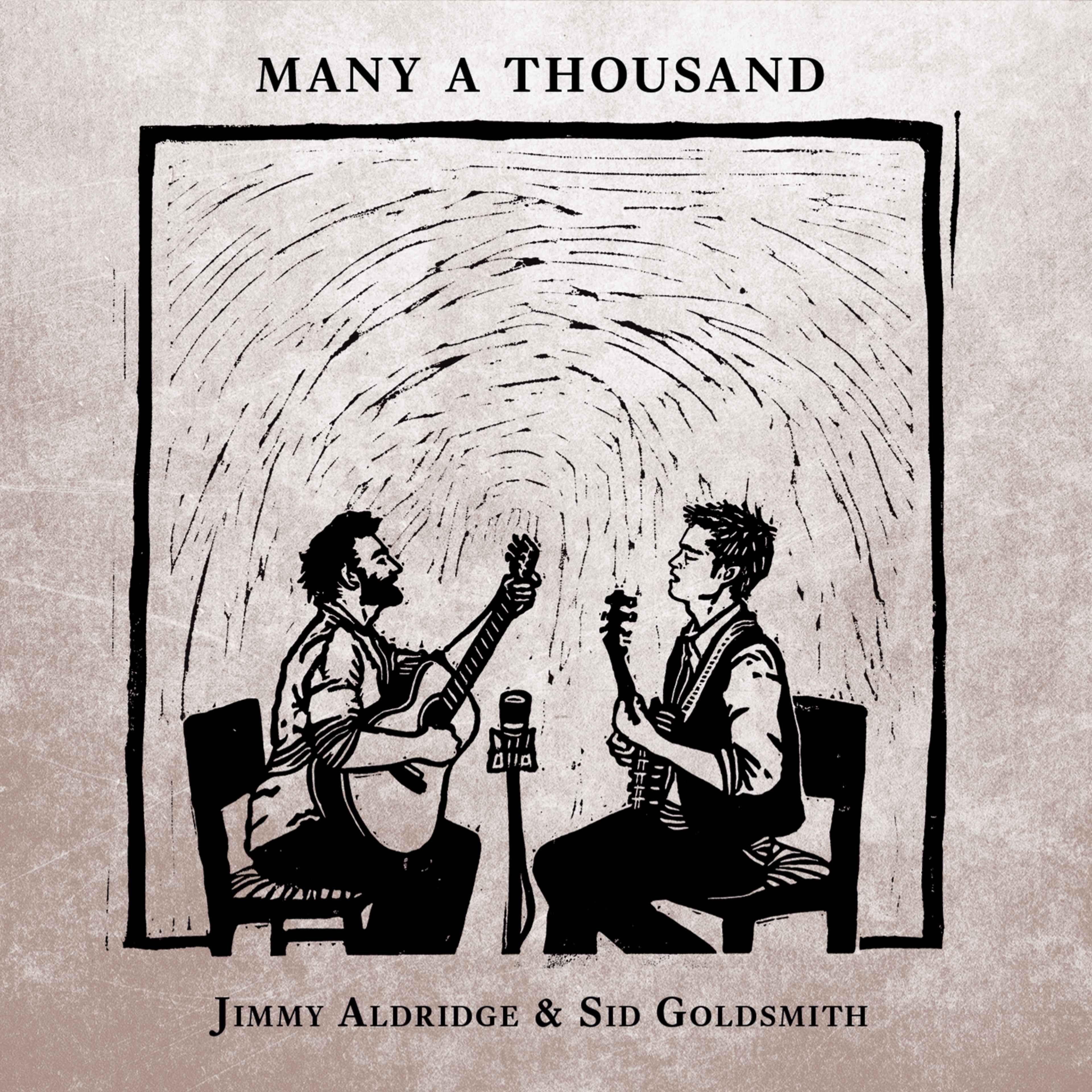 Album title: ‘Many a Thousand’

Label: Many A Thousand Records MATR18001

The release of their critically acclaimed second album ‘Night Hours’ in 2016 cemented Jimmy Aldridgeand Sid Goldsmith’s reputation as two of the most exciting musicians and social commentators on the British folk scene. Songs have always taken centre stage with Jimmy and Sid and on ‘Many A Thousand’we see the duo flexing not only their vocal and instrumentation skills, but also their talent as composers. Part of what makes this compelling duo tick is a love of traditional folksong and a mutual passion for the history that is carried in the music. On ‘Many A Thousand’ the past and present sit side by side, with original songs more than comfortably holding their own next to the traditional. Another crucial element to this partnership is a shared world-view – sustainability, traditional crafts and living in tune with the land – all elements that deeply inform their music.

The shared world-view that is so integral to Jimmy and Sid’s ethos was arrived at from two very different starting points. Although the two grew up 5 miles apart in Norfolk, they didn’t actually meet until 8 years ago. Prior to becoming a professional musician Sid worked for many years in traditional forestry and as a grower on an organic farm on the edge of Bristol. Jimmy did a PhD in Politics and Energy and then worked for several years as an environmental policy advisor at a think tank in Westminster. Both were stalwarts of the Bristol session scene and kept bumping into each other. They’d share the odd tune but it was only when they found themselves in the same ceilidh band (performing at big barn dances across the UK), that they started playing songs together, eventually deciding to form as a duo. They may have come from different ends of the spectrum of environmental work, but they were driven by the same purpose, one that converges in their music and which ultimately drives them to select the songs they sing.

Despite moving away, both are still active on the Bristol scene and involved with the huge barndances around the city, and further afield. These are raucous events with 3-400 young people letting loose to traditional music – not something that you hear about every day. Such a young and vibrant scene, however, needs nurturing and to this end, they are heavily involved in tune sessions and singarounds with the aim of gathering people together and cultivating new singers. Another impetus to create these new nights is that many of the long running folk clubs are starting to close down. This is something that Jimmy and Sid feel passionately about – that the history and community that exists within our folk clubs continues.

The 11 tracks that make up ‘Many A Thousand’ include traditional songs such as Working Chap, a bothy ballad from Scotland, which timelessly depicts the struggles of poverty and working to make ends meet, with an additional verse written by Martin Carthy who first recorded the song in 1990. There’s Poacher’s Fate, a song Jimmy and Sid learnt from one of their all-time favourite Norfolk singers, Harry Cox, who was recorded singing it in 1970 (the act of poaching in traditional songs seen by the duo as an illustration of the age-old battle against land and power lying in the hands of the rich). Then there’s The Reedcutter’s Daughter, a traditional song about a traveller who falls in love with a girl from Hoveton – a village very close to where the two grew up and which features the organ from St Mary’s, the village church. Hawk’s Callis Jimmy and Sid’s re-write of the slave spiritual No More Auction Block– their version imagining a world without military conflict. Then we have the original songs – Turning of the Year, about the power of the elements to blow away our troubles; The Tide, written for an event celebrating the history of Rotherhithe on the South bank of the Thames, reflecting on the relentless rhythm of the tide of both river and people in and out of London every day; A Monument to the Times, a song about Shirebrook in Derbyshire, which for years was the home of a unionised colliery and which now houses several giant warehouses employing people on zero-hours contracts and paying less than minimum wage. And then there’s Hope and Glory, more pertinent than ever, a defiant song in response to the rise of nationalism in England and the use of a whitewashed image of what the country once was in order to stoke fear of change.

Whatever your political views, these are beautiful and eloquently executed songs,combining outstanding vocal work and sensitive instrumentation. With a powerful sense of social conscience, the common thread of political struggle, resistance and justice runs through their music and their live shows.  Call it a kind of quiet, calm activism, if you will, but there’s an integrity that shines through their work that is both invigorating and compelling.

‘Many A Thousand’ will be released on7thSeptemberand launched at Kings Placein Londonon 6thSeptember. This is followed by a full UK tour including dates at All Hallows Church, Leeds (16thSept) and Bristol Folk House (30thSept). A full list of tour dates can be found here