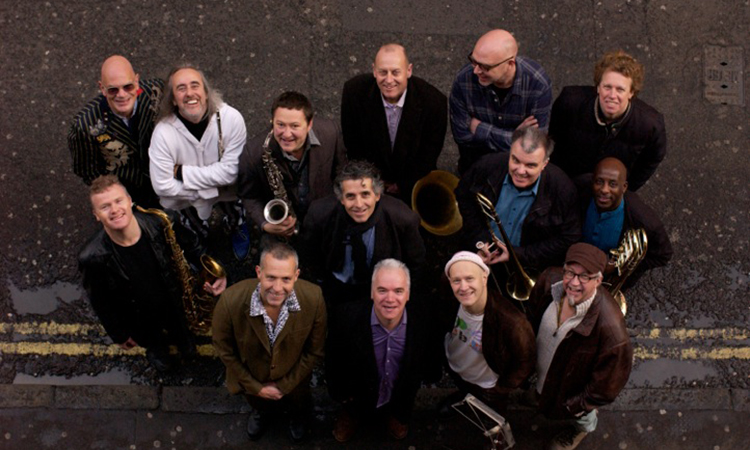 “In the late 80s, as jazz made a rare dent on popular consciousness, the brashest, brightest sounds came from Loose Tubes. Gleefully mixing Swing and Ska, Dolphy and Zappa”    ****The Times

Thirty years after it first blew into Europe’s jazz consciousness, Loose Tubes’ anarchic, freewheeling and uniquely exhilarating music still reverberates through the UK’s music scene. The 21 piece big-band line-up reads like a veritable Who’s Who of a brilliant generation of musicians. From keyboardist, composer and arranger Django Bates to saxophonists Mark Lockheart (Polar Bear), Iain Ballamy (Food) and Julian Argüelles to irrepressible trombonist and charismatic MC Ashley Slater (Freak Power) and trumpeter Chris Batchelor (Big Air), its members have been at the heart of some of the UK’s most inspired music of the last three decades. Indeed, the band’s open-minded, risk-taking approach to their music has influenced large ensembles and rehearsal ensembles across Europe.  But it isn’t just the music that has left its mark. Conceived as an agitprop anarcho- syndicate collective without a single clear leader, you can trace the genesis of the F-ire and Loop Collectives back to its approach and it’s perhaps no surprise to find that F-ire driving force Barak Schmool was a onetime keyboard roadie for the band.

Loose Tubes evolved in 1984 from a lively youth-workshop outfit and Ronnie Scott’s was at the very heart of the Loose Tubes story.  The anarchic big-band appeared regularly on Frith Street – legend has them stopping the traffic to play outside the club – and the band’s valedictory performances in September 1990 are caught on two brilliant live albums (Sad Afrika and Dancing On Frith Street). These shows – the band’s first London shows in 24 years offer a unique chance to hear the band in all their tradition twisting glory. Equal parts genius and mayhem, expect beautiful inter-woven melodies, squalling horns, rip-roaring sax lines, distorted sambas, sneaky New Orleans grooves and much more from one of jazz’s greatest ever groups. And as you would expect from such an iconoclastic outfit, as well as playing their greatest hits (including Yellow Hill, Shelley, The Last Word, Sticklebacks and Sunny) the band will also present new music after a collective decision that they “definitely didn’t want to be their own tribute band” resulted in a commission from BBC Radio 3 (in association with Jazz on 3) for new works from principal composers Chris Batchelor, Steve Berry, Eddie Parker and Django Bates. These will be premiered at Cheltenham Jazz Festival on Saturday 3rd May 2014, before the band commences their week-long Ronnie’s residency on Monday 5th. Catch them while you can!

Loose Tubes originated from a jazz workshop put together by the celebrated British jazz composer and educator Graham Collier in 1983. During the first few weeks of the workshop, keyboard player Django Bates and bass player Steve Berry began to introduce original music to the ensemble. They chose the name Loose Tubes and played their first London gig in 1984 at The Prince Of Orange, Rotherhithe. Django Bates, Steve Berry, Chris Batchelor and Eddie Parker were responsible for much of the music that was noted for an openness and alertness to many traditions (always mixed with a healthy dose of creative disrespect). During live concerts, trombonist Ashley Slater (later to become front man of the pop group Freak Power) acted as the band’s compère and became renowned for his sarcastic quick wit and ready repartee.