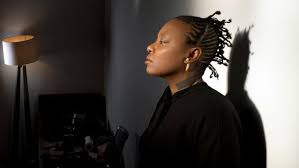 Over the course of her twenty five year career, fearsome bassist, prolific songwriter, distinctive vocalist, and inspired producer, Meshell Ndegeocello has eschewed genre for originality, creativity and integrity. Refusing to be pigeon-holed musically or personally, she has been celebrated and berated for her politically charged lyrics on race, love, sex, betrayal, God, and power.  With that, she has earned critical acclaim and the unfailing respect of fellow players, songwriters and the dedication of her diverse unclassifiable fans.  Ventriloquism, is the new recording from Meshell Ndegeocello and unusually, a collection of covers selected for their reflections or as an outlet for plain emotional truths.

Ventriloquism has the hallmarks of all Ndegeocello’s work; lush and investigative, subversive and sublime. As always, she pays tribute to her diverse influences and in these eleven covers, we hear them layered over one another.  She filters ‘Tender Love’ through a folky, Californian filter and brings Vaudevillian accents to ‘Sensitivity’. She recreates Smooth Operator in five, and turns ‘Private Dancer’ into a sultry waltz.

The reimagining affords not just a new musical experience but also a comment on the narrow expectations of sounds and structures for black artists and black music.

“Early on in my career, I was told to make the same kind of album again and again, and when I didn’t do that, I lost support. There isn’t much diversity within genres, which are ghettoizing themselves, and I liked the idea of turning hits I loved into something even just a little less familiar or formulaic. It was an opportunity to pay a new kind of tribute.”

Some tracks were selected for their reflections: The album opens with ‘I Wonder If I Take You Home’ which marked the early influence of Prince and Hip Hop on commercial pop, and was a reference for Ndegeocello’s own ‘If Thats Your Boyfriend’. Constantly asked to be “funky”, Meshell includes George Clinton’s ‘Atomic Dog’ as a reminder that the heart of funk is ineffable and irreverent, not just acted in showy flourishes, slaps, or noodling. Other songs offered an outlet for plain emotional truths: ‘Waterfalls’ was stripped down and delivered as an honest and needed personal lament.  Prince’s ‘Sometimes It Snows In April’ is an enthralling album highlight.  It’s extended intro is an accidental result of the band’s desire to delay the inevitable sadness of the song.  ‘Funny How Time Flies’ approaches sarcasm in its ominous and lonely sounds, exemplifying how these times – personally for Meshell, politically for many – are neither flying nor fun.

“The year around the recording of this album was so disorienting and dispiriting for me personally and for so many people I know and spoke to all the time. I looked for a way to make something that was light while things around me were so dark, a musical place to go that reminded me of another, brighter time.”

Ventriloquism was recorded in Los Angeles with the familiar family of players that Meshell has worked with for years. Chris Bruce plays guitar, Abraham Rounds is on drums, Jebin Bruni co-produced the album and plays keys.

A final note to the listener, Meshell chose art for the album package that hints at what’s inside: A graphic V, a hidden M, the artwork is symbolic, sexy, and calls on the language of protest of the era these songs were mined from. With no words or pictures, the artwork is itself a declaration that even when you cannot imagine what to say, if you come together to create, you can find transformation and reinvention, the old can become new, today can become tomorrow.

A portion of the profits from this album will be donated to the American Civil Liberties Union.

I Wonder if I Take You Home (Lisa Lisa & The Cult Jam feat. Full Force)

Sometimes it Snows in April (Prince)

Funny How Time Flies (When You’re Having Fun) (Janet Jackson)

Don’t Disturb This Groove (The System)