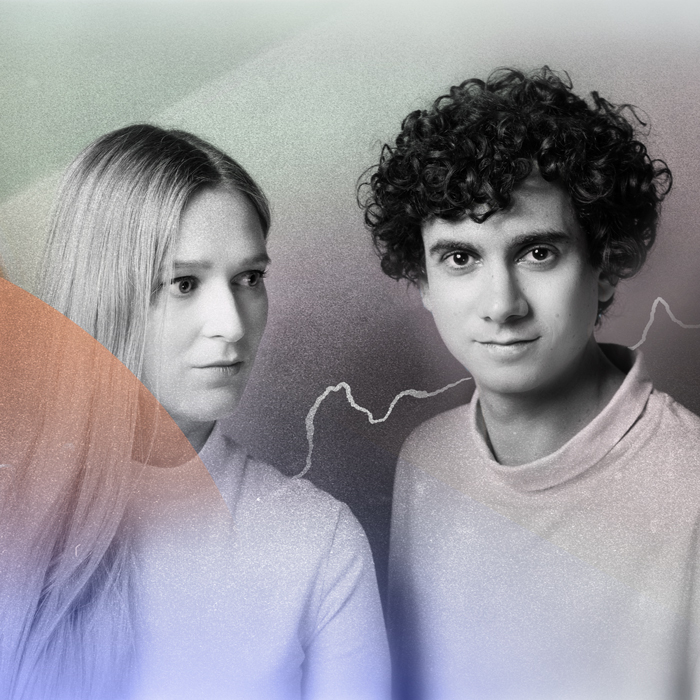 From an armoury of instruments, they blend mallets, vibraphone, celeste, piano, rare drums and antique bells with bubbling synths to construct a genreless soundscape that juxtaposes the earthy, primitive sounds of the acoustic, with the cinematic, symphonic sound of the electronic.  Repetitive harmonies and pulsing rhythms meet with mystical, intricate patterns. It is beautiful, enchanting, often haunting, always with groove.

Recaptures is Minihi’s debut recording, and quite possibly one of the year’s most confident and accomplished debuts. But given their experience, that comes as no surprise.  Louise is the percussionist for Agnes Obel and Zands performs with Melt Yourself Down.  Between them, they have worked with artists and ensembles ranging from the Royal Philharmonic to Lady Gaga and together they recorded on Thom Yorke’s Grammy nominated album, ‘Anima’. They have composed and performed for film and theatre companies including The National and the Royal Shakespeare Company and work across classical, jazz, folk, pop and indie genres taking inspiration from them all.  Their influences too are eclectic; Julianna Barwick, Rival Consoles, Brian Eno, Stravinsky, Kaitlyn Aurelia Smith and Son Lux.

A percussion / composer duo is rare enough, but rarer still, Louise and Zands are partners outside the studio as well as in. The couple met ten years ago while studying at Guildhall and although they worked on many composition projects together, Recaptures is their own personal statement.  Their compositions capture their shared experiences – places they’ve been and people they’ve met.  Aside from ‘seeing into each other’s heads’, writing sessions can be spontaneous. It also allows them to explore sounds from their shared collection of instruments – literally, a shipping container’s worth.

Minihi first came to our attention with Tokaido, a single released in May 2020 by Deutsche Grammophon as part of  Project XII a collection presenting new works by innovative and creative contemporary musicians.

Recaptures was recorded in 2019 and is released on the independent Berlin-based label, Unperceived Records. It comprises seven outstanding original compositions including ‘Hallowed Halls’ (released as a single in July ’20) written as a homage to  ancient architectural spaces and the sense of history living within their walls. The sound of the celeste (old orchestral keyboard) combines with synths, bell-like textures and a repetitive groove built from the bodhran (traditional Irish drum), while Louise’s voice creates a sense of reverberation within the space.  As concert halls and theatres lie dormant, waiting to be filled with life again, the track takes on a new significance.

‘Phemie’s Walk’ (released as a single October 20) was written in response to the final walk Louise had with her dad on a remote trail in the Scottish Highlands. The beautiful, yet bleak surroundings coupled with the raw emotion when one is faced with their own mortality made for a bittersweet and profound memory that they wanted to capture musically. ‘Lost Takeno’ (released as a single January 2021) is named after a small Japanese rural seaside town Louise and Zands visited on a quiet, stormy day.  They had recorded sounds there (something they do often) to capture the eerie experience of feeling they had the place to themselves. The ‘hollow’ sound is created by blending an upright piano with celeste and hammered dulcimer, with addition of layered shakers and other rustic percussion.