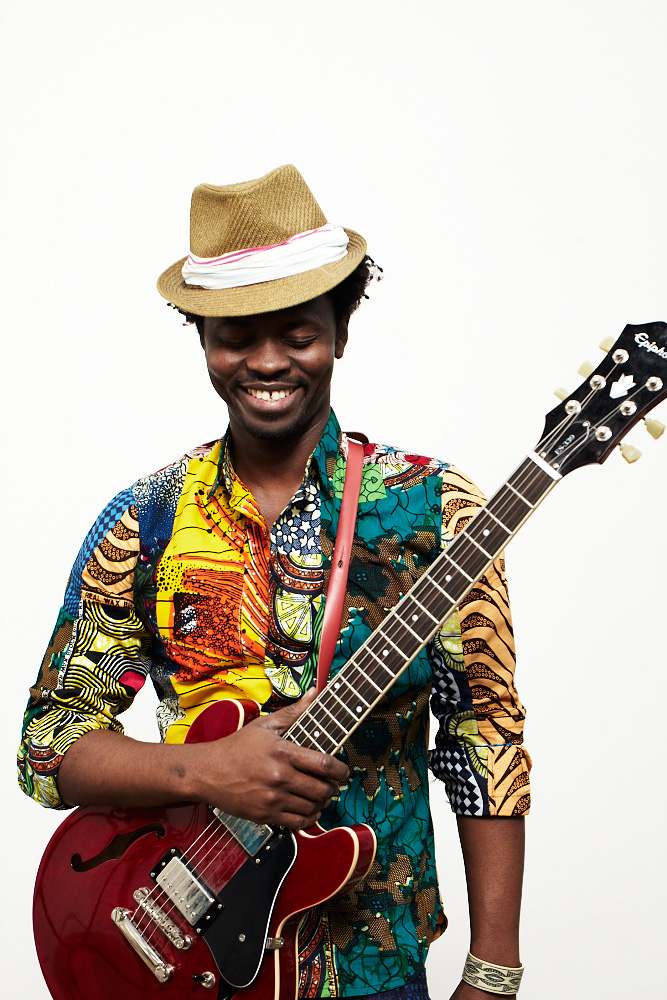 Music has forever been sacred to the Kouyaté family. Their griot heritage stretches back to the 13th century and today they are fully embroiled in the musical life of Conakry, Guinea’s capital city. Moh!’s grandmother bought him his first traditional guitar in the local market while his father taught him his first chords. In his teens, he would earn the reputation of the up and coming player of Guinea and one of the most talented guitar players on the circuit. Today, he instinctively follows the masters of Guinean music: the Bembeya Jazz leaders, Sékou “Diamond Fingers” Bembeya, the authentic Syli, Kouyaté Sory Kandia, alongside Ousmane Kouyaté, Salif Keita’s principal guitar player.

Yet for Moh! It’s not all about the West African traditions. An introduction to George Benson’s album Tenderly by the great Amadou Diallo drove him to mine inspiration from other great players across jazz, funk, soul, blues and rock – Django Reinhardt, Carlos Santana, BB King, Ben Harper, Jimi Hendrix and Joe Zawinul have all made their mark on Moh! Kouyaté’s fresh sound. Indeed, in 2004, American blues musician Corey Harris (who had travelled to Mali with Martin Scorsese and Ali Farka Touré for the motion picture From Mali to Mississipi) invited Moh! to join him on a tour of the US, where in its vastness Moh! discovered the deep links between the Blues and its West African roots. Three years later Moh! settled in Paris where he would mix with a group afro-jazz musicians including the likes of Ba Cissoko and Fatoumata Diawara. He performed in the city’s small venues, bars and beyond, then eventually Europe, during which time he began composing music for his first album.

Loundo (Un Jour) is Moh! Kouyaté debut recording.   A rich culmination of the different musical experiences he has gathered from Africa, America and France, it combines Mandingo traditions with his own stylish mix of blues, Afrobeat, funk and jazz. Whether singing in Soussou, Malinké, Djahanké, Pular or French, Moh! speaks about happiness, life’s drama, exile, everyday uncertainties in Guinea, struggle and hope. In the song Loundo, a gentle rock ballad, he expresses his own vision of life: perseverance, patience and motivation must surely lead to positive things.

Moh! Kouyaté brings his infectious swaying grooves a to audiences across three venues at Celtic Connections 2015 making his first appearance in a double header with Celtic dancefloor act Sketch at the Oran Mor on 21st January. The following evening, Moh!  makes a guest appearance performing in a very special live  edition of BBC Radio World on 3 presented  by Marry Ann Kennedy broadcast from  The CCA in the heart of the city.

Moh’s final appearance is with one of the festivals’ big  names, Edinburgh indie/roots quartet Bwani Junction who celebrate the 30 year anniversary of Paul Simon’s classic recording, ‘Graceland’ at the Old Fruit Market on January 23rd.  Moh’s West African stylings makes the perfect opening act for a band whose own whose lead guitarist African-style licks reflect formative lessons from the Bhundu Boys’ Rise Kagona.