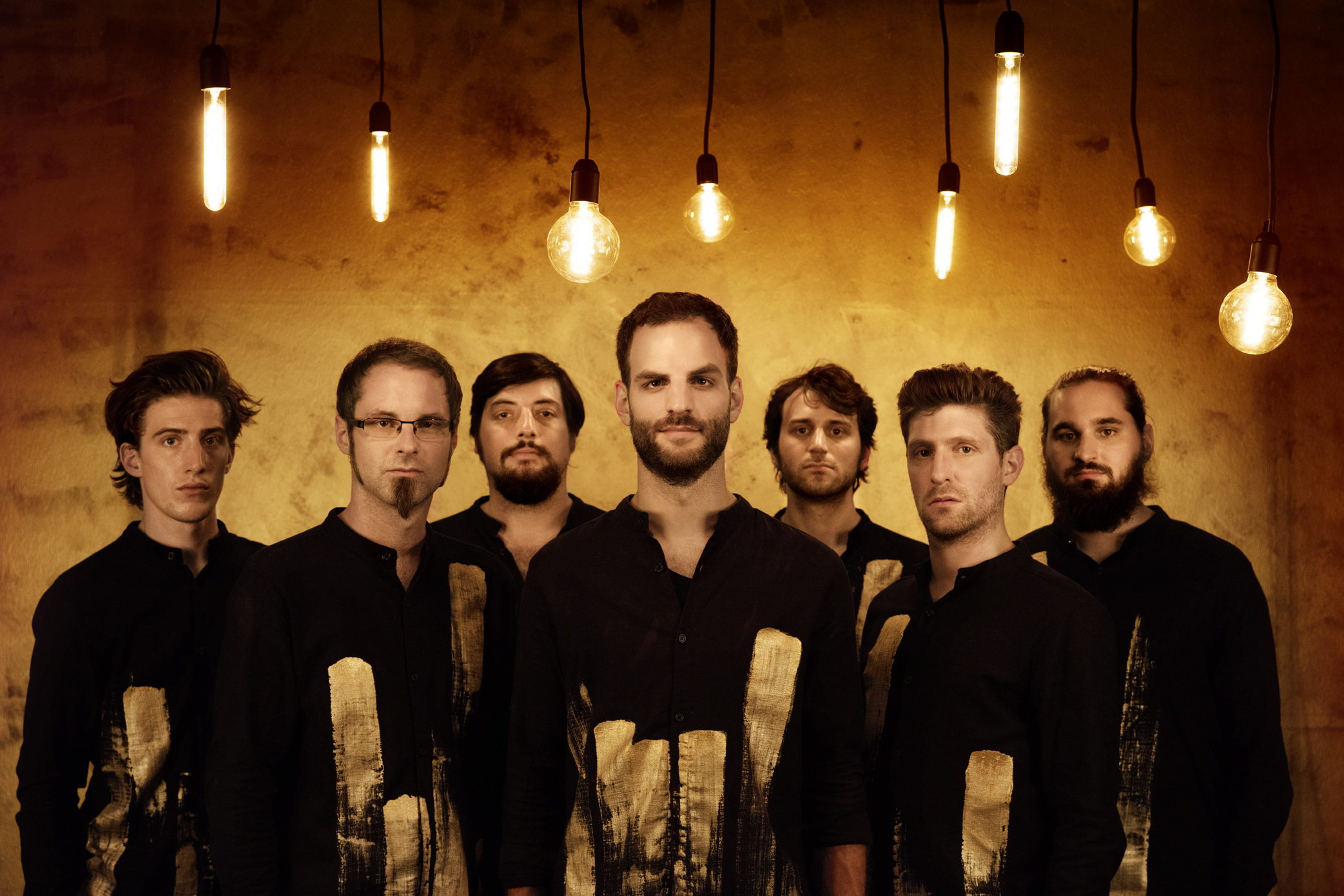 With 2 drummers, 2 bass players and 3 horns, 7-piece Austrian band Shake Stew is not your average outfit. Led by dynamic bassist Lukas Kranzelbinder, Shake Stew features some of the leading lights on the young Austrian and German jazz scenes, their unusual set up helping create a unique sound of hypnotic afrobeat and jazz grooves mixed with intense and mysterious soundscapes. Shake Stew is Lukas Kranzelbinder and Manuel Mayr on double and electric bass, Clemens Salesny on alto and tenor sax, Johannes Schleiermacher on tenor sax, Mario Rom on trumpet and Niki Dolp and Mathias Koch on drums and percussion. Their forthcoming new album Rise And Rise Again will be released in the UK on 4 May and features special guest Shabaka Hutchings on two tracks.

Their critically acclaimed debut, The Golden Fang (2016) led one Austrian newspaper to liken them to “an intergalactic road movie for the ears.” Formed by Kranzelbinder in 2016, specifically to perform at the prestigious Jazzfestival Saalfelden, Shake Stew released The Golden Fang shortly after, going on to sell out a six-month residency at Vienna’s legendary jazz club Porgy & Bess. It was there that Kranzelbinder met Hutchings, after inviting him to play with the band, which in turn led to his guest spot on Rise And Rise Again. Like Hutchings, Kranzelbinder is a prolifically talented musician – at only 30 years old he has already established himself as one of the most active and versatile bassists of the young Austrian music scene with an awe-inspiring list of achievements; he’s been a member of Mario Rom’s Interzone, written an opera, founded the Polyamory Sound Festival, organised a series of concerts on top of different mountains in Carinthia called ‘Almrausch(en)’ which involved both musicians (including himself plus double bass) and audience hiking 2000m up a mountain, created a new project to open the Südtirol Jazz Festival – and all this alongside performing with a raft of A-listers from the Austrian jazz scene, as well as touring and recording with Shake Stew.

The new album Rise And Rise Again is comprised of 6 original tracks, all composed by Kranzelbinder, and opens with the compulsive beats of ‘Dancing in the Cage of a Soul’, which soon develops into a driving anthem packed with danceable grooves. ‘How We See Things’ slows things down and is a beautiful composition featuring the three tenor saxes (including Hutchings) playing the main theme over a subtly addictive bass rhythm, with trumpeter Mario Rom weaving a magical solo over the entire composition. One of Kranzelbinder’s trademarks as a composer is to give room to his band mates and ‘Goodbye Johnny Staccato’

was written specifically for tenor saxophonist Schleiermacher, inspired by the 60s TV show ‘Johnny Staccato’. The two part ‘Fall Down Seven Times, Get Up Eight’ features a captivating solo from trumpeter Rom in the first part, while in the second, the bass drums kick in and the horns start a praising, almost gospel-like chorus, with Hutchings’ presence growing with each bar. The final track, ‘No Sleep My King’, is the perfect foil to the opening foot-stomper – Moroccan field recordings blend with the repetitive bassline over which floats Clemens Salesny’s dream-like alto sax, creating an almost trance-like quality.

The fact that we never feel the set up of two basses and two drums are overpowering or jarring is testament to the band’s virtuosity, as well as Kranzelbinder’s talent as a composer and bandleader. The whole sound just ‘fits’ perfectly. Within a relatively short space of time, this group of unconventional musicians has forged itself a reputation in it’s home territory as one of the most exciting new bands on the scene and with Rise And Rise Again they will hopefully do the same in the UK.

‘Shake Stew is one of the most exciting new bands I have come across for a while so lets get them over to the UK please!‘ LondonJazzNews