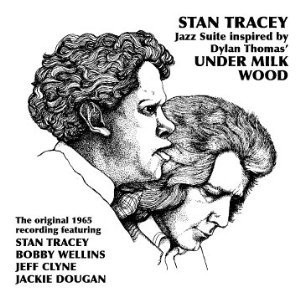 2015 is the 50th Anniversary of one of the most famous recordings in British jazz history – Stan Tracey’s ‘Under Milk Wood’.    Inspired by the BBC’s 1953 radio recording of Dylan Thomas’ play for voices, it encapsulated the heady 60’s jazz boom and became an instant success, quickly recognised as one of the most significant British works in jazz.  It has been reissued continually since its 1965 release and takes its place in Jazzwise Magazine’s list of ‘Jazz Albums that Shook the World’.

An effortlessly iconic masterpiece, the interplay between Stan’s piano and Bobby Wellins’ tenor sax was a masterly combination but it was also Wellins’ haunting, evocative solo on’Starless and Bible Black,’ which captured people’s imaginations. Indeed,  twenty years ago, the Observer commented that that track “remains probably the finest single recorded performance by a British jazz group. ….. it evokes to perfection the atmosphere of a soft spring night”.

For this very special celebratory concert, Bobby Wellins, who played an essential role in the original recording, will be joined by Andrew Cleynderton bass andStan’s son, Clark Tracey, on drums, both member of  Stan’s groups for the last 35 years, plus Stan’s personal choice of pianist, Steve Melling. The narrator of Dylan Thomas’ seminal work will be Stan’s  preferred voice, his own grandson, Ben Traceywith whom he also collaborated for the album ‘A Child’s Christmas,’ inspired by Dylan Thomas’ short story.  This is a unique opportunity both to revisit a seminal jazz landmark and to celebrate a much-missed figure in British jazz