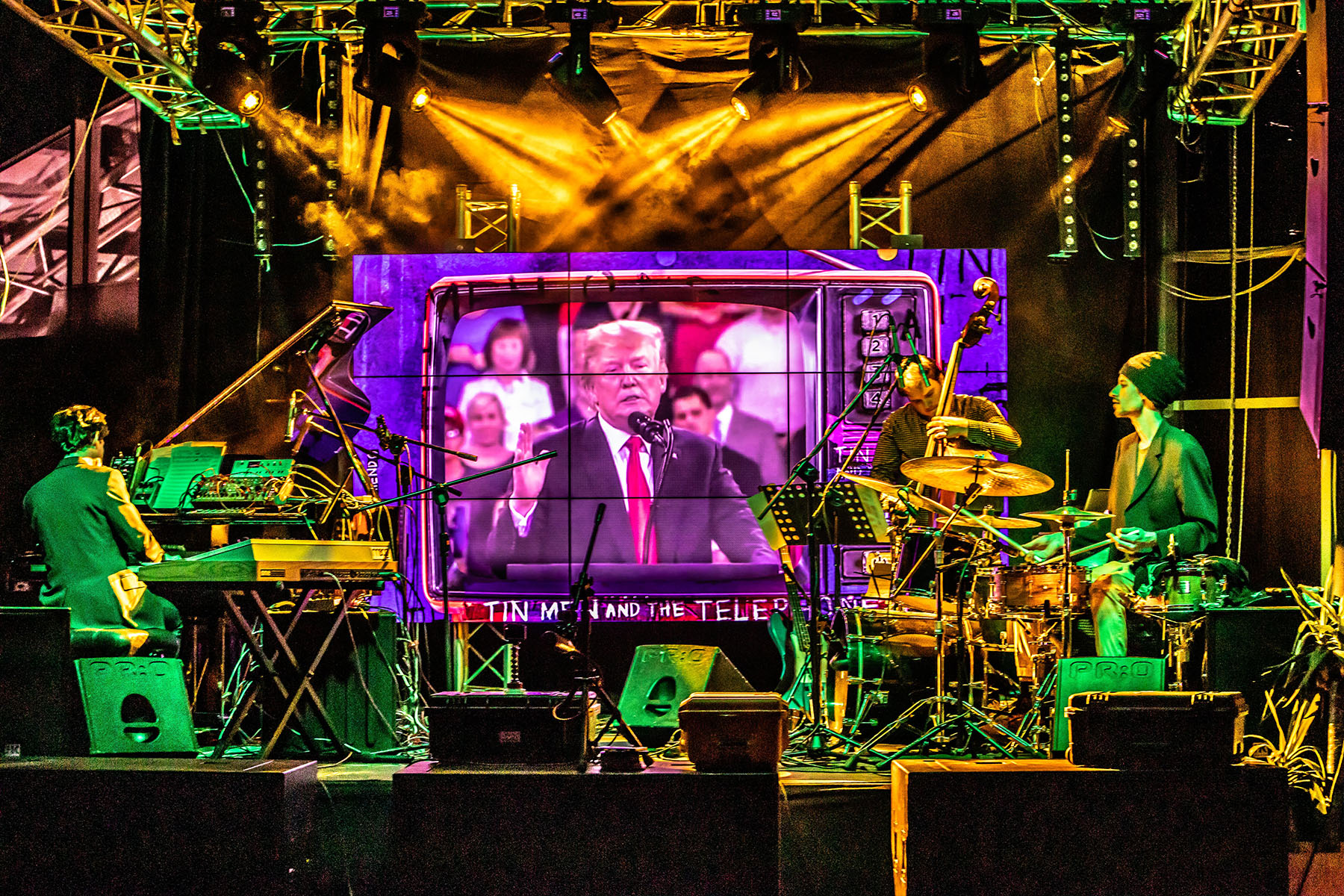 Artist:    TIM MEN AND THE TELEPHONE

A gloriously twisted take on climate change, a modern jazz soundtrack & glimpse into the future of live music

“it surpassed any other online event I’ve seen since lockdown. And I’ve seen a lot!” (audience member)

As the music industry rises to the challenge of a global pandemic and life in lockdown, online streaming has, at least for the time being, become the new normal.  But what is missing, for both artist and audience, is the coming together, connecting, and enjoying a shared experience. The need to innovate has never been greater.

Now, following weeks of trials and tribulations, plus investment in the very latest Wirecast technology, Tin Men frontman, composer, pianist and electronics-guru Tony Roe delivers a show, online, with the same immersive interaction their audiences have come to expect.  Using the latest technology, audiences can attend a virtual show, interacting with the band and sharing responses with fellow audience members.  In this way, they become part of a community, not simply solo spectators.

Tin Men and the Telephone have always pushed boundaries. For four nights, 4th-9h June, they present their brand-new show, online, to a limited audience through four host partners; The Birmingham Conservatoire, Sage Gateshead, The Royal Welsh College of Music & Drama and Turner Sims. Through the use of Zoom Video software and the band’s revolutionary bespoke smartphone app, ‘Tinmendo’, audiences can become a part of their multi-faceted, interactive show in real time.

Three years in the making, G.R.E.A.T.E.S.T (aka as ‘Global Relocation of Evolved Apes Towards Exoplanet Suitable for Terraformation’) is an immersive multimedia performance that addresses the very timely topic of global pandemics and climate change.  With a twist.

As a global health crisis takes hold and the climate crisis escalates, the time has come for humanity to leave planet Earth. Audience members are on board a space ship heading towards a newly discovered planet, however, it’s far too cold! As they travel through space, they must collaborate to warm it up…

Audiences at home are asked to download Tinmendo, type, swipe and shake to interact with the band.  They can guide the set to become part of the narrative, craft melodies and create beats from which the band improvise.  All this serves as a jumping off point for the band’s highly acclaimed, riveting jazz excursions that thread throughout the performance.

Here, a stunning modern jazz soundtrack, soundbites from campaigning figures and global leaders (from Greta Thunberg to David Attenborough) and offbeat visuals combine with the storyline’s twisted comedy.  It’s, hugely innovative, engaging and gloriously off the wall, providing a glimpse into what the future of live music might look and sound like.

Tin Men and the Telephone are an Amsterdam-based jazz group who have made a name for themselves for their innovative approach to engaging audiences during their highly acclaimed, improvised, modern jazz performances and the development of their bespoke smartphone app, ‘Tinmendo’.  In 2017, they were selected to undertake six UK residencies across three years to develop their work further.  Working with some of the UK’s brightest minds from the world of theatre, comedy and tech, they experimented with staging, story lines, technology and audience participation exploring new ways to experience the live show.  Crucially, local audiences joined in and gave their feedback on what they felt worked, and what could be developed further. Three years later, having assimilated all that was learned, Tin Men have honed their existing show to present G.R.E.A.T.E.S.T a brand new, immersive multimedia performance that addresses the very timely topic of climate change.

“multimedia gadgetry and a sense of mischief combined to create something fresh and unexpected. … jazz can be fun and profound at the same time…a 21st-century gig The Times *****

“These are skilled musicians who can improvise within any straitjacket imposed by an audience, in a musical equivalent of Whose Line Is It Anyway? “(The Guardian)